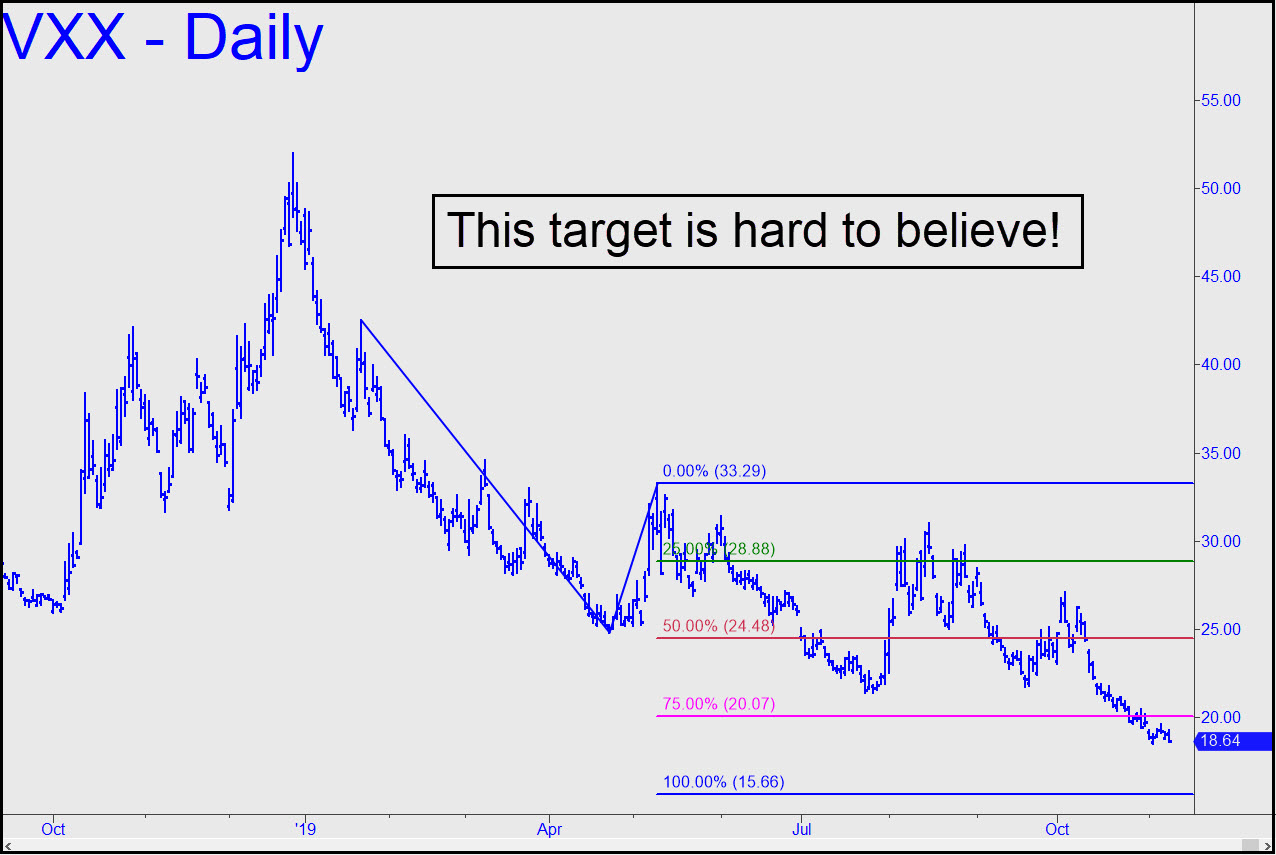 I’d suggested rolling the calls we held last week to this Friday’s expiration, but I’ll track the trade only if I hear from at least two subscribers who did it. Otherwise, let’s plan on buying if and when VXX falls to 15.66, the next bear-market target of consequence. This Hidden Pivot is more compelling than the last (19.15) because the A-B impulse leg that created it actually exceeded a major low.  There are no precise confirmations at p, but the pattern did generate a mechanical short at the green line in August that would have been very profitable for a seller of call premium. (No one has ever made a dime buying put options on VXX even though it is falling, falling, falling most of the time.) It’s hard to believe VXX could fall as low as 15.66, but that’s what happens when a bull market never sells off for more than a day-and-a-half like this one. ______ UPDATE (Nov 21, 10:20 p.m.):  With sellers dominating the stock market lately, it seems unlikely that VXX will fall to the 15.66 target any time soon. We’ll keep it mind nonetheless but forego any trading in this vehicle unless the opportunity looks exceptional. _______ UPDATE (Nov 26, 8:02 p.m.):  The 15.66 target is once again within easy distance, so plan accordingly.  If it’s hit today, buy four Dec 6 16 calls. They should be trading for around 0.40, but pay no more than 0.43 unless I tell you otherwise. _______ UPDATE (Nov 30): More detours and delays. Do nothing further for now, since we only buy this sucker-bait when it is hitting significant Hidden Pivot lows. _______UPDATE (Dec 13): Based on timely recommendations I made in the chat room, I have established a tracking position that includes four (or a multiple thereof) Dec 20 17s for 0.24 and four Dec 20 18s for 0.21. Offer the latter to close for 0.45, good till canceled; and two of the former for 0.70. I’d be surprised if we don’t see a rally from very near these levels, and soon, but it is already surprising that 15.66 was exceeded at all, even if only by 0.15 points so far.