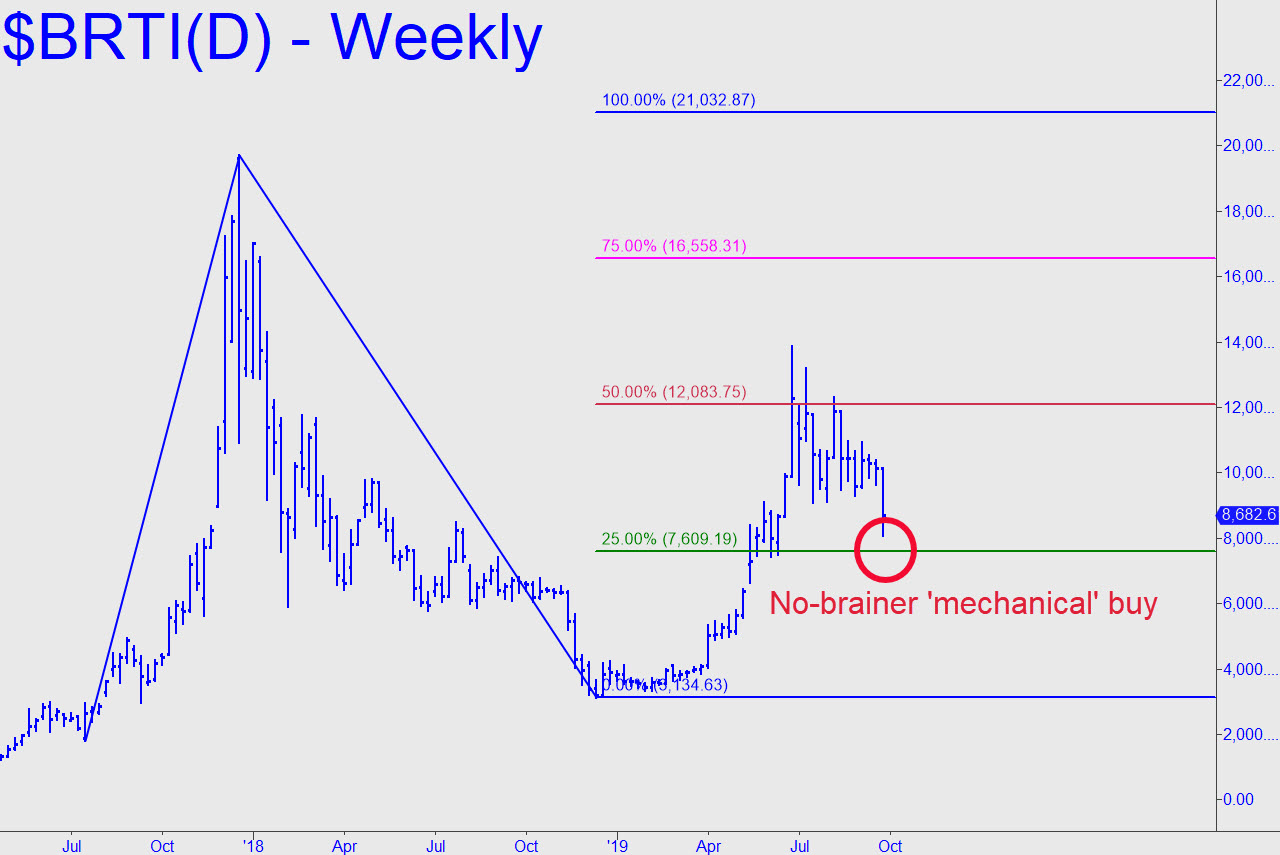 I’ve been trying to avoid this vehicle, since it stirs up craziness in the trading room. That said, a pullback to x=7609 would trigger a textbook ‘mechanical ‘ buy.  Hard to ignore? Not for me, since the nearly $4500 initial risk is scary no matter how you slice it.  I’m putting out this advisory for informational purposes anyway, but if I hear from at least two subscribers who do the trade (this will be on the honor system), I’ll make it official by establishing a tracking position. Little further guidance would be needed, since winning would be a simple matter of gutting it out. Your stop-loss would be just beneath C=3134, with p=12,083 as a minimum objective.  Please let me know in the trading room if you’re a player. Good luck! ______ UPDATE (Oct 5): Paypal has dropped out of Facebook’s Libra cryptocurrency experiment, so don’t be surprised if the ‘mechanical’ buy at 7609 triggers soon. It missed by an inch on the last selloff. ______ UPDATE (Oct 10, 10:50 p.m.): Bitcoin has turned pathetic again. I’ll leave the tout up for a while anyway because the dip to 7719 came so close to signaling the ‘mechanical’ buy noted above that we could consider the trade as having triggered. _______ UPDATE (Oct 24, 6:50 p.m.): The nasty selloff from late June’s 13855 high has finally triggered the ‘mechanical’ buy signal noted above.  This type of trade works best in vehicles that move violently, but I’d suggest watching from the sidelines, since, with a stop-loss at 3133,  the initial theoretical risk would be $4475. A less risky place to attempt entry would be at the 6166target of the smaller ABC pattern shown here. The long-term rally target associated with the 7609 buy signal is 21,032. _______ UPDATE (Oct 29, 8:30 a.m.): The buy signal triggered on Oct 23; two days later, BRTI embarked on a $2600 rally, its strongest since last year. If you climbed aboard, you should take a fat partial profit. No one reported doing the trade, but if I hear from at least three subscribers who did, I’ll establish a tracking position. _______ UPDATE (Nov 2, 3:50 p.m.): Some ‘experts’ wrote last week that $10,000 resistance looks all but impenetrable, but I would disagree. In any event, we’ll use a trailing stop if and when bitcoin pushes above $1ok, so stay tuned for details if you care.